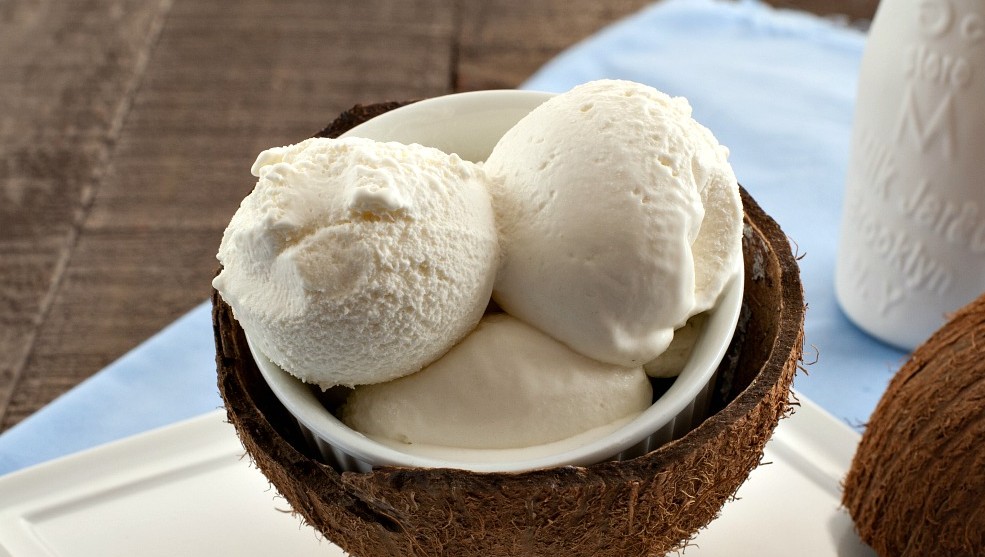 There has been a fast-growing demand for non-dairy frozen desserts, with more Americans adopting a more plant-based diet. And coconut has become popular as its saturated fats make rich and creamy vegan frozen desserts.

Of course, buying a tub of ice cream from the store is always convenient. But with four simple ingredients, you can make some homemade coconut milk ice cream that is much healthier, with no artificial additives or preservatives. You also get to play around with other flavors. Our coconut milk ice cream-making recipe is straightforward to follow with or without an ice cream maker. We have also given you essential tips to ensure you achieve the creamy ice cream consistency you desire

What is coconut ice cream made of?

The biggest concern with making ice cream without an ice cream maker is achieving an airy and creamy texture. However, we have the recipe for homemade coconut milk ice cream with no churning or ice cream maker that is also creamy and light. Here are some helpful tips to help you achieve this.

Although coconut ice cream contains a healthier type of saturated fat (medium-chain triglycerides), it is still a high-calorie dessert that may cause weight gain. In addition, its calorie content is higher than dairy and other nut milk like almond, soy, and cashew. Therefore, coconut milk ice cream is only healthy when consumed in moderation.

Health experts link high saturated fat content with an increase in harmful LDL cholesterol levels, elevating the risk for heart disease. While there is insufficient research on the health impact of coconut milk ice cream, people at risk for heart disease or with high cholesterol should consult their doctor before indulging in coconut milk ice cream.

On the other hand, coconut milk ice cream is rich in potassium which maintains the health of every cell in the body. Potassium reduces the risk of high blood pressure, fatigue, muscle cramps, and salt sensitivity.

How do you thicken coconut milk into a cream?

NOTE: Whether it is homemade or store-bought, coconut cream has a relatively short shelf life. That’s why you should use it right away; otherwise, it will start to melt and go bad if left out too long. If you need to use it later, put it in an airtight container, pop it back in the fridge, and it will last between five to seven days and up to two months when frozen.

Can you boil coconut milk to make cream?

Can you make ice cream with canned coconut milk?

Alternatively, you can also use homemade coconut milk to make ice cream if you have access to mature coconuts. Making the milk yourself ensures there are no preservatives, added sugar, or toxic packaging. To make coconut milk, you blend or grate the coconut meat and extract the milk by straining it through a cheesecloth.

Can I freeze coconut cream?

Yes, if frozen correctly, coconut cream can last up to two months in the freezer. It’s good to note that freezing the coconut cream may change its flavor, texture, and consistency, but it will still be good to use. To properly freeze your coconut cream, put it into a freezer-safe container and pop it in the freezer. A more convenient way to freeze coconut cream is to pour it into ice cube trays and only pop out as many as you want to use instead of defrosting the whole container.

While making ice cream at home is relatively easy, making non-dairy ice cream can be quite the challenge. The main goal for any ice cream is to distribute the ice crystals and air bubbles evenly to form a creamy airy texture. Unfortunately, vegan milk has more water content than dairy milk, making the ice cream icy and runny. Fortunately, coconut’s high-fat content makes it the simplest vegan ice cream to make. Here are the mistakes to avoid to achieve the best results.

1. Not letting the ice cream maker bowl get cold enough.

You need to ensure the ice cream machine container is frozen-solid cold when pouring in your ice cream base. Otherwise, the ice cream will never freeze. Place the bowl in the freezer overnight or for a couple of hours before using it. Also, ensure the sides of the container are dry before connecting it to the machine. The water will freeze onto the sides and prevent the paddle from moving, which also prevents churning.

2. Pouring warm ice cream base into the ice cream maker

If your ice cream base is too much and won’t fit into the ice cream maker bowl, it is best to churn it in batches or buy a larger machine than overfilling your machine. Overloading the machine with an ice cream base will only end up spilling over the sides as it freezes and expands, causing the rest of the base to under-churn. The best solution is to fill the machine no more than three-quarters full with the ice cream base. Then, as it churns, it has enough room to aerate and fluff up.

Check this too: Why is My Ice Cream Maker Not Working?

Though the ice cream base starts to freeze while in the machine, churning will not give a firm result. If you keep your churning for longer than recommended, your ice cream will develop an icy texture. Ice cream’s optimal texture and consistency do not happen in the machine; it occurs in the freezer. Churn your ice cream for at most 30 minutes or until it has the consistency of a soft serve, then transfer it to another container and put it in the freezer for a few hours to harden.

Coconut milk ice cream is a great option for anyone who is vegan or has a dairy-sensitive stomach. But portion control is vital when eating it due to its high saturated fat content. So with coconut milk, coconut cream, sugar, vanilla extract, and a pinch of salt, you can easily make a coconut milk ice cream that is soft and airy.

The Indoor Haven is a participant in the Amazon Services LLC Associates Program, an affiliate advertising program designed to provide a means for sites to earn advertising fees by advertising and linking to Amazon.com. The Indoor Haven also participates in affiliate programs with Bluehost, Clickbank, CJ, ShareASale, and other sites. We are compensated for referring traffic and business to these companies.